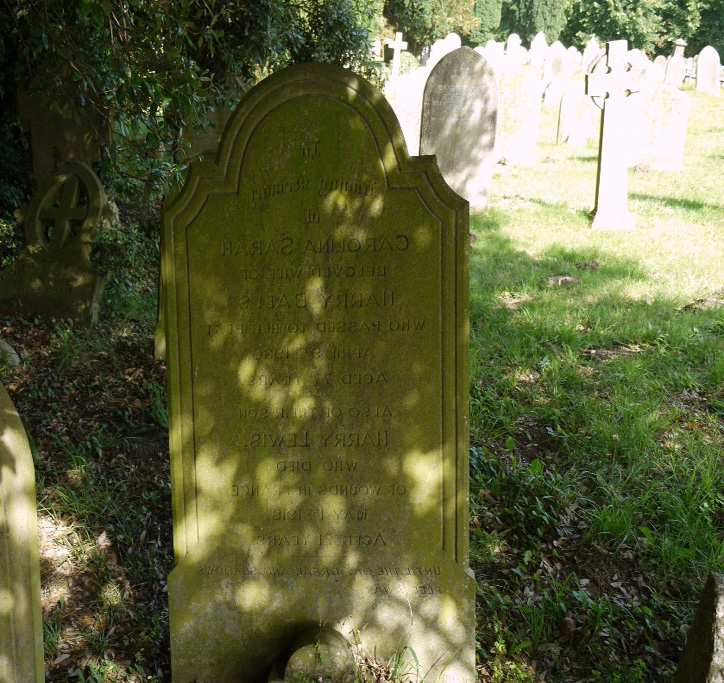 Harry followed his father into gardening.  His father, an under gardener, worked for the Long family at Hurts Hall and the family lived in the Lodge, in South Entrance, Saxmundham.   Harry originally enlisted in the Suffolk Regiment before transferal to the 1st Battalion, Cambridgeshire Regiment.   After surviving some two years fighting, during 27-28 April 1918 Harry received wounds that caused his death on 1 May 1918.    Harry is buried in the Esquelbecq Military Cemetery, France, a village near the Belgian frontier, some 30 miles west of Ypres.

Harry Lewis Balls, one of five children of Harry and Caroline Balls followed his father into gardening.  His father, an under gardener worked for the Long family at Hurts Hall and lived in the Lodge, in South Entrance, Saxmundham.  Likely the house was provided by the estate.  Seemingly Harry senior had a sense of humour, when he recorded Harry Lewis, aged fourteen as being a ‘lad in a gentleman’s garden’.

Harry Lewis Balls originally enlisted in Ipswich from 1916 onwards in the Suffolk Regiment (service number 2800) before being transferred to the 1st Battalion, Cambridgeshire Regiment.    He died from wounds likely received during the night of 27-28 April.   From War Diary of the 1st Battalion of the Cambridgeshire Regiment the battalion was relieved during the night by the 89th brigade, except for the left company holding Lock 8, CONVENT LANE.  This company was placed under orders of the 89th infantry brigade and was very heavily attacked.  By the 28th of April only thirty-five men remained upon relief of the company. Private Harry Lewis Balls was likely wounded during this attack.

Harry died from wounds received on 1 May 1918 and is buried in the Esquelbecq Military Cemetery, France, a village near the Belgian frontier, some 30 miles west of Ypres.   Esquelbecq was the location of a casualty clearing station.

His father donated £5 and his mother £2 towards the Saxmundham town centre memorial. Albeit with the Memorial Field option receiving most donations, the Town Centre Memorial was replaced by two brass plaques: one in St John the Baptist Church and the other in the Congregation Chapel, now the United Reformed Church.  Harry Lewis Ball is also commemorated on the Manchester Oddfellows Memorial Board of Saxmundham and District men who served in World War One.  Additionally, Harry is remembered on his mother’s gravestone In St John the Baptist churchyard in Saxmundham.

Ernest born in Norfolk was a gardener.  Perhaps he moved to Saxmundham to work for the Long family at Hurts Hall?    Leaving his wife Lottie and children Ernest enlisted in the Cambridgeshire Regiment and fought on the Western front where he sustained severe wounds during the Third Battle of Ypres at St Julien, on 31 July 1917.  Tragically Ernest after spending nearly a month in the hospital at Boulogne, succumbed to his wounds.  His widow Lottie moved to South Lopham to be close to Ernest’s family.  She never remarried and remembered her late husband until her death in March 1968. 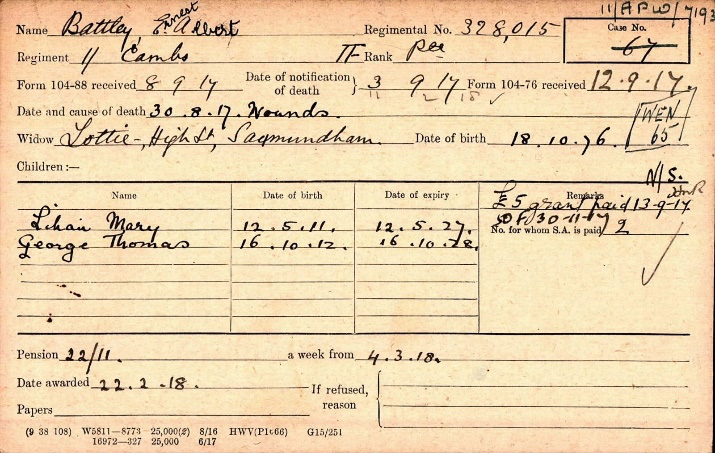 There is disagreement regarding the identity of the soldier named as ‘E A Batley’ on the War Memorial.  Previously identified as Private Charles Batley, born in Laxfield in 1876 and resident of Sweffling who enlisted in 18th Battalion of the Duke of Cambridgeshire’s Own Regiment who died 24 December 1916, after research, the likeliest person is Ernest Albert Battley.  Thus, his surname was incorrectly recorded on the War Memorial. (Not an unusual occurrence).

Ernest Albert, one of eleven children of George, a navy pensioner, and Hannah Battley was born in South Lopham, Norfolk.   In 1910 Ernest married Lottie Shilling in Kent, before the couple moved initially to South Entrance, Saxmundham in 1911 and thereafter lived in the High Street.  They had two children, Lillian Mary born May 1911 and George Thomas born October 1912.

Ernest was a gardener.  Perhaps he moved to Saxmundham to work for the Long family at Hurts Hall?    Seemingly he did not enlist until 1916 as his Medal Record Card does not include the 1915 Star.  Whilst the couple lived in Suffolk, they maintained close links with Ernest’s family in South Lopham/Roydon near Diss.  Their son, George Thomas, born in Saxmundham was baptised in Roydon and Ernest Albert is commemorated on the Roydon War Memorial.

Ernest sustained severe wounds during the Third Battle of Ypres at St Julien, on 31 July 1917.  The battalion started the attack as an understrength battalion in the Brigade Reserve.  Advancing with 470 fighting men, by 1st August the Battalion had lost sixteen officers with 286 other ranks killed, wounded, or taken prisoner.   The dogged determination of the Cambridgeshires at St Julien became legendary in the Battalion.  Tragically Ernest succumbed to his wounds after spending nearly a month in the hospital at Boulogne.  He is buried in the city’s Commonwealth War Grave Cemetery.

Lottie was advised of her husband’s death three days later on 3 September 1917 and received a five-pound grant on 13 September plus allowances paid for her children until they reached the age of sixteen.  Whilst the money eased the financial burden, it did not ease the grief. Lottie did not remarry

and moved to South Lopham to be close to Ernest’s family.  Poignantly Ernest is commemorated on her gravestone in Roydon. The inscription reads: ‘Ernest Albert Battley, died of wounds and interred in Boulogne Cemetery, Husband of Lottie Shilling Battley’, who died in March 1968.  Ernest and Lottie’s children never married.  Lillian Mary devoted herself to teaching, becoming headmistress of Depwade School.  In retirement she served St Andrew’s Church, where she was a Church Warden from 1979-1984.   George Thomas moved to the Midlands, where he was employed as a printer before returning to Norfolk.  Both George and Lilian died in 1968. 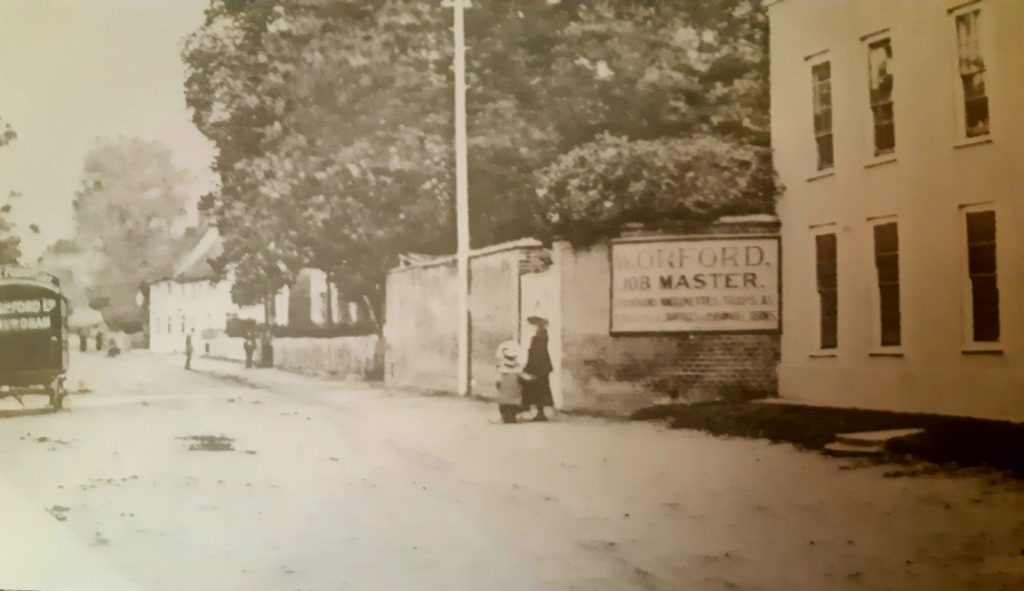 Frederick Gerald Orford worked for his father William Golding Orford, in the family’s pork butchery business.  This was just one of William Golding Orford’s enterprises.  Frederick’s elder brother Edward Daniel assisted his father in running the businesses and seemingly Frederick, as a younger son, sought adventure and enlisted in the Suffolk Regiment in 1914.  After nearly two years of military service Frederick perished during the Battle of the Somme in 1916.

In 1911 Frederick’s father, William Golding and mother Julia Jane Orford (nee Kerridge) lived in Ivy House, South Entrance with six of their nine children.  Aged eighteen, Frederick was employed as a butcher’s assistant.  In all likelihood he worked for his father’s pork butchery business.  This was just one of William Golding’s enterprises.

William served as the Parish Clerk, was a jobmaster (someone that either drove carriages or arranged for carriages for special occasions) and according to Kelly’s Directory of 1912, he was also a farmer at Burnt House Farm (outside Saxmundham on the Rendham Road).    Frederick’s elder brother Edward Daniel aged twenty-nine assisted his father and seemingly Frederick, as a younger son, was keen to seek adventure and enlisted in the Suffolk Regiment in 1914.

Frederick initially joined the 4th Battalion of the Suffolk Regiment and was posted overseas on 8 November 1914.  Thereafter he was transferred to the 9th Battalion.  After serving his country for nearly two years, Frederick perished during trench fighting in an area known as the Sandpits during the Battle of the Somme.  He has no known grave and is commemorated on the Theipval Memorial.  Frederick is also commemorated on Saxmundham’s Chapel, Church and Fromus Square memorials.  As a member of the Oddfellows, Frederick is remembered on the Wooden Plaque that used to hang in the Market Hall.  Less than three years later, whilst mourning their son, the family faced more tragedy.

William Golding Orford died on the 15 May 1919 and seemingly the family moved from their home in South Entrance to the High Street.  Eldest son, Edward Daniel Orford, married, had a son, Aubrey Edward, moved to 51 Fairfield Road and became a school attendance officer.   Frederick’s sister, Ethel Julia married Percy John Tillett, an outfitter’s traveller and lived in Framlingham.  His sister Ruth, single in 1921, worked for the Great Eastern Railway as an assistant collector. 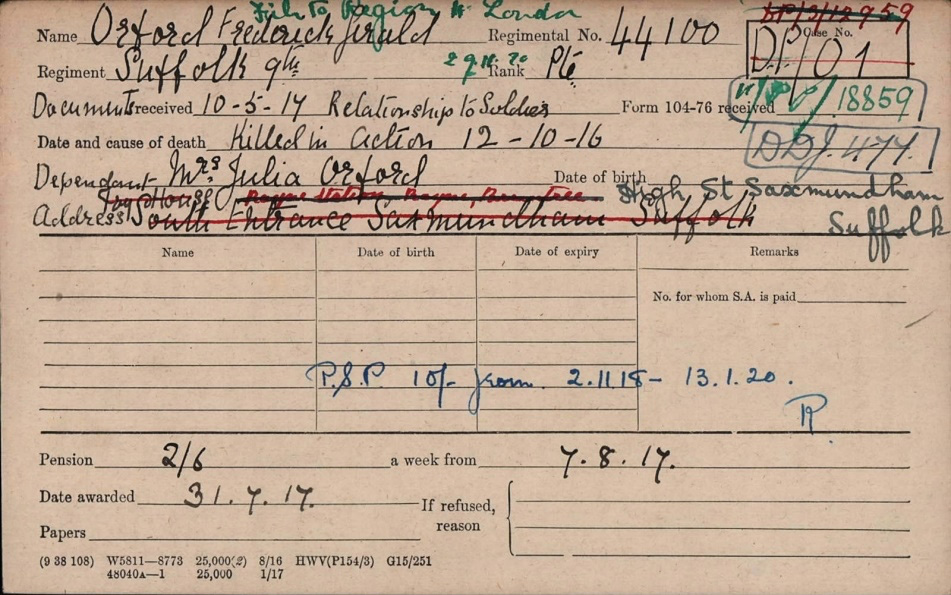