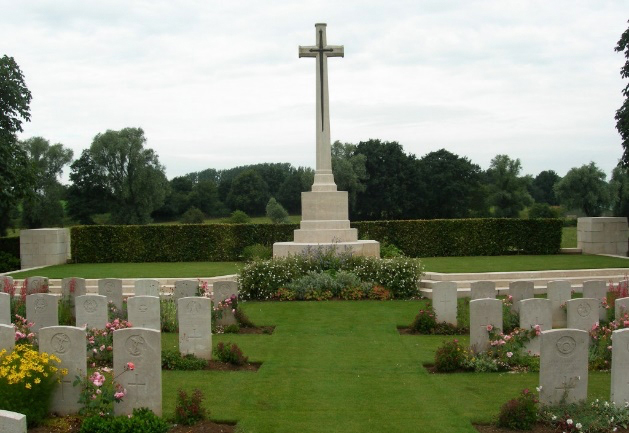 George was employed as a carter and likely worked for Henry Lawrence and Sons, producers of mineral water. He married Agnes May Messenger from Farnham in 1904 and enlisted in Saxmundham in the 12th Battalion of the Suffolk Regiment when Barbara, his daughter was eleven years old in 1916.   George likely lost his life during a large-scale raid on the village of La Vacquerie, a small village approximate ten miles South-West of Amiens. Agnes May remarried, moved to King’s Lynn, where she lived for the rest of her life and died in 1976 aged ninety-three.  Barbara Violet never married and emulating her mother, Agnes, lived in King’s Lynn until her death in 1984.

The son of Charles and Alice Cowles from Brundall, George born in Oulton, lost his father when he was a young boy.  Seemingly he was raised by his mother and stepfather father, John Alexander, a police constable from Westleton.  In 1891 the family lived in Lowestoft but by 1901, aged nineteen years old George had moved away from home and lodged with the Bolderson family at Mollets Farm in Farnham.  By this time George was employed as a carter and likely worked for Henry Lawrence and Sons, producers of mineral water.  Secure in his job, George married Agnes May Messenger from Farnham in 1904 and the couple, by 1911 lived in Albion Street with their six-year-old daughter, Barbara Violet.   George enlisted in Saxmundham in the 12th Battalion of the Suffolk Regiment when Barbara was eleven years old in 1916. 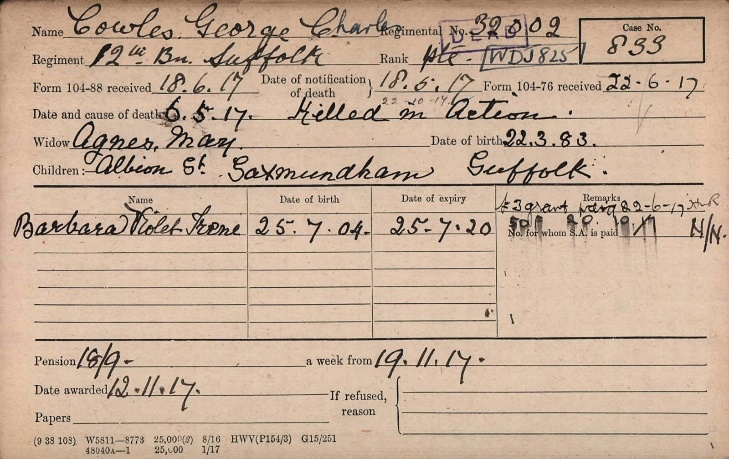 George likely lost his life during a large-scale raid on the village of La Vacquerie, a small village approximate ten miles South-West of Amiens and is buried in the Fifteen Ravine British Cemetery, Villers-Plouich. Nord, France.  His headstone reads ‘Lost awhile our treasure love gained for ever safe above.  Son of Charles Cowles, of Lowestoft; husband of Aggie Cowles’.  By the time the Commonwealth War Graves Commission arranged George’s headstone, his mother and stepfather lived in Eyke, near Woodbridge and his wife had remarried.Agnes or ‘Aggie’ left Albion Street and married William Henry Depear, a dock labourer in King’s Lynn in May 1919.  She had another child, William Depear, born in 1921, a stepbrother for Barbara Violet.  Agnes remained in King’s Lynn for the rest of her lifeand died in 1976 aged ninety-three.  Barbara Violet never married and emulating her mother, Agnes, lived in King’s Lynn until her death in 1984.

George Charles is commemorated on the Saxmundham Church, Chapel and Town War Memorials.  Additionally, he is remembered on the War Memorial in his mother’s and stepfather’s village of Eyke.