The Saxmundham memorials record an A. E. Everett but not James Everett.   However, the Oddfellows Memorial recorded both of them perishing during the First World War.  Both men were related, both were born and lived in Saxmundham until 1911.   Albert Everett, aged eighteen, a railway labourer, a son of George and Amelia Everett (nee Burrows) lived in Milton House.  Concurrently, James, a bricklayer’s labourer, son of Julia Everett, a boarding housekeeper, also lived at Milton House.  James and Albert were cousins, however only Albert is commemorated on the Memorial and only James is recorded as perishing during the First World War.

The 1911 census recorded Albert Everett, aged eighteen, a railway labourer, as a son of George and Amelia Everett (nee Burrows) living in Milton House.  Another separate 1911 census form noted that Julia Everett a self-employed (living on her own account) single woman, a boarding house keeper, and her son James, a bricklayer’s labourer, also lived at Milton House.  Both forms were completed by Frances N Brown on behalf of George and Julia Everett.   That neither George nor his sister Julie completed the census forms likely indicated illiteracy.

George and Julia Everett were siblings, the children of James and Elizabeth Everett of Knodishall and thus, James and Albert were cousins, who in 1911 lived in the same property.  However, only James is recorded as perishing during the war.

The exact date of James’s death is not known.  He was recorded missing during the period 9 to 19 April 1918.  Michael Woods considered that James perished ‘during the battles of the Lys (the third battle for Ypres) where the casualties were some 500’.  James is commemorated on the Ploegsteert Memorial, Belgium and the Oddfellows Memorial but not on the Saxmundham Chapel, Church or Fromus Square memorials.  There may be a reason for this exclusion.

James married Alice Ellen Cooley on 24 November 1917 at Uxbridge Register Office and at that time the couple lived in Hayes, Middlesex.  Theoretically, those that perished during the war were to be commemorated where they lived, and James no longer lived in Saxmundham. However, did his family know about his marriage and the birth of his son, James, on 6 March 1918? 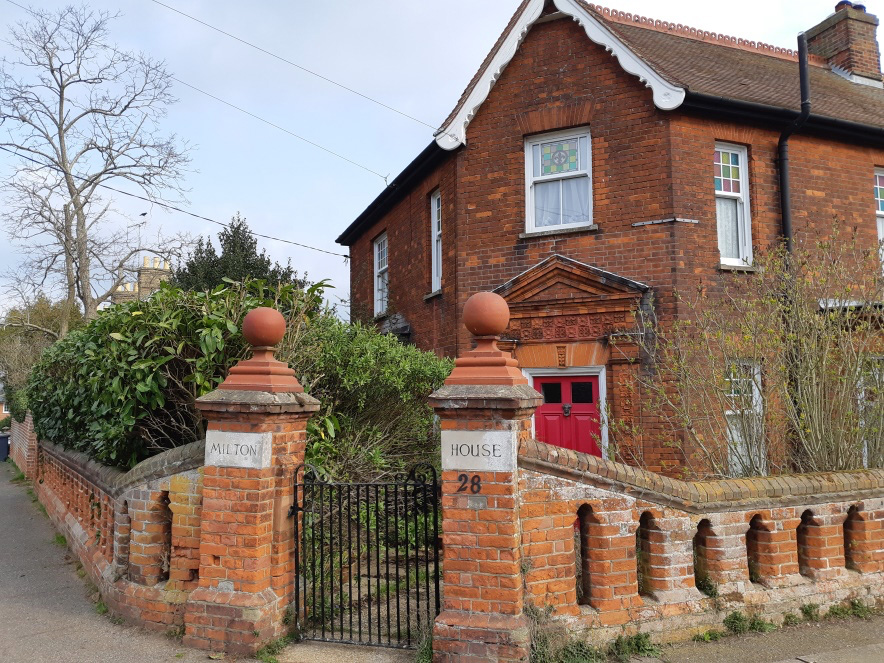 James junior was baptised on 10 April 1918, during the time when his father, James senior was either fighting or already a casualty of war in Belgium.  Moreover, his mother’s name does not appear in Hillingdon baptism records.  Did his mother die due to or during childbirth or had she simply left her baby in the care of the Uxbridge Union?

The Clerk to the Guardian of Poor of the Uxbridge Union applied for Dependant’s Pension on behalf of James junior.  Additionally, seemingly quite unaware of James senior’s child, Mary Ann Cracknell, James’s aunt, of 12 Carr Avenue, Leiston also applied for the pension.   This application may have been on behalf of James senior’s mother.   Julia was still alive in 1921 and lived and worked in Yoxford as a housekeeper for Alice Sylvia Cole.    Whilst the narrative resolves some questions, it is a mysterious case and the mystery continues with James’s cousin, Albert.

Undoubtedly Albert did not live with his widowed mother in 1921 and Amelia appeared to continue taking in boarders whilst residing in Mill Lane.  It is apparent that Amelia was illiterate as the census was completed by a third party and witnessed.    But where was Albert?

It can be assumed that Albert was deceased by 1921 as his name appeared alongside his cousin, James, on the Oddfellows Memorial.  James married and resided in Hayes, Middlesex before his death.  Did his cousin also leave Saxmundham to work in the London area? 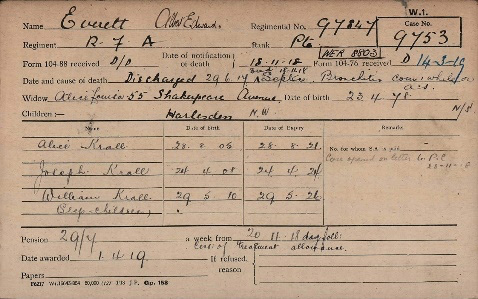 Assuming that this may be the case a likely candidate is found. An Albert Edward Everett, of the Royal Field Artillery, service number 97847 was discharged due to ill health from military service on 29 June 1916.  He later died on 18 November 1918.  In the interim he married a widow, Alice Louisa Krall with three children: Alice, Joseph, and William in Willesden, Middlesex on 26 September 1914. On the marriage certificate Albert’s father is recorded as George Edward Everett, thus there is a match on the father’s name.  At the time of marriage, the couple lived at 55 Shakespeare Avenue in Willesden.  Prior to that in 1911, Alice Louise and her children lodged in Harlesden with a railway worker, William Mead, and his family.  Albert Edward Everett worked for the railway before leaving Saxmundham and is recorded as a Railway Platelayer upon his death.   The proximity to cousin, James, the fact that Albert Edward was employed with railway work, possibly the fact that Alice Louise lodged with a railway worker who may have introduced her to Albert Edward all indicate a potential connection.   Finally, as Albert Edward died after the end of the war and hence did not have an official war grave, he is a suitable candidate for the missing A E Everett.  But if you know different, please let us know.