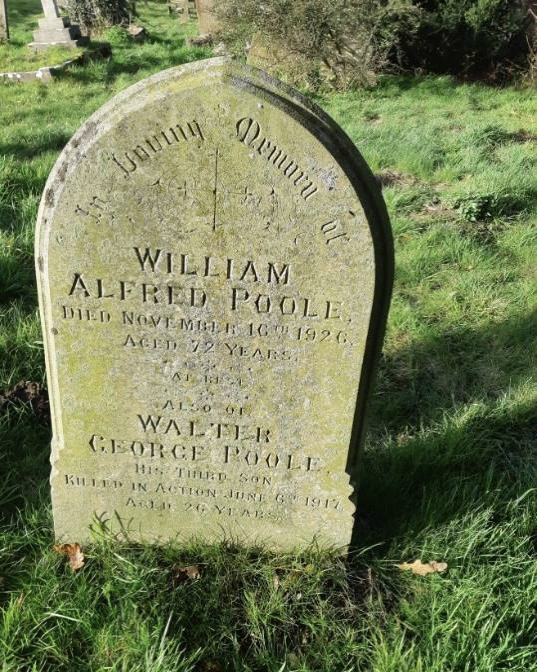 Walter George the youngest of three sons of William Alfred Poole, a grocer and Eliza nee Button, enlisted in 26th the Battalion of the London Regiment.  The narrative of Walter links Saxmundham to Great Yarmouth and London.   Prior to enlistment Walter worked as barber in the Market Place.  He perished in 1917 and is buried in the Dickebush New Cemetery Extension, West Vlaanderen, Belgium.

Whilst Walter formerly served in a Territorial Regiment, it does not appear, as with several other Saxmundham men, that he was transferred from the Suffolk Regiment.  In 1911, prior to enlistment, Walter worked as a barber’s assistant and in 1912 Kelly’s Directory he is recorded as a barber in the Market Place.  His mother had died some four years earlier and his elder brother, William Henry had passed away in 1899 aged just fourteen years old.  The family lived in Fairfield Road from at least 1881 when Walter’s parents, William and Eliza married.

The narrative of Walter George connects Saxmundham to Great Yarmouth and London.  His parents married in 1880 by licence in Islington at Saint Mary Church.  Eliza Button, from South Town, Great Yarmouth was likely in service whilst William Alfred Poole worked as a grocer’s assistant in Saxmundham. William succeeded in his trade and by 1911 aged fifty-six William is recorded as a grocer’s manager.  Ten years later in 1921, his only surviving son Frederick Charles, Walter’s brother, worked for his father, W. A. Poole, Grocer, at Suffolk House in the High Street. 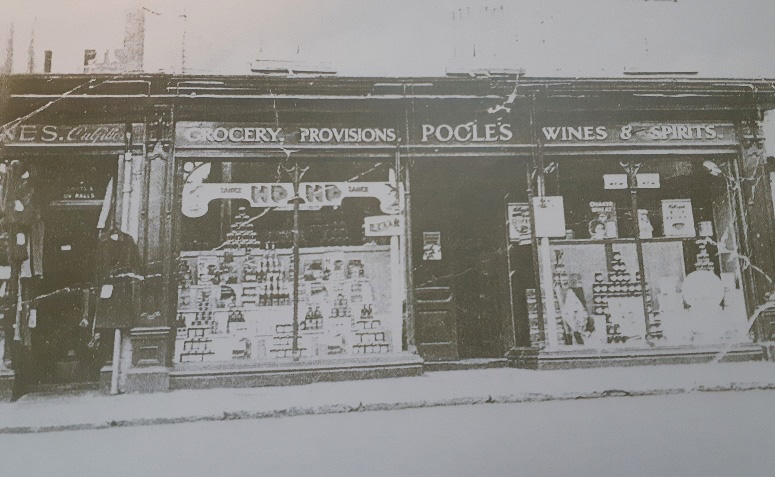 Walter George’s brother Frederick Charles boarded in South Town, Great Yarmouth and is recorded as a grocer’s assistant.   It is likely that the family retained links with their late mother’s relatives resulting in Frederick working and living in Great Yarmouth.   However Frederick did not stay there.

By 1916, Frederick Charles lived in Plumstead, London and was employed as a munitions worker.  Likely he either enlisted to fight and was injured or was medically unfit for military service.  Repeating his father’s actions, Frederick also married a woman from South Town, Great Yarmouth in London.  On 26 February 1916 Frederick married Maud Daisy Mayes and the couple lived in the Stoke Newington/Woolwich area until the end of hostilities.  Thereafter they returned to Saxmundham.  By this time Walter George had died during fighting and is buried in the Dickebush New Cemetery Extension in West Vlaanderen Belgium.  He is commemorated on Saxmundham Chapel, Church and Fromus Square memorials.  Additionally, Walter is remembered on his father’s headstone in St John the Baptist graveyard.

William Alfred died in 1926 and Frederick and Maud ran the grocery business at Suffolk House until their deaths respectively in 1931 and 1933. 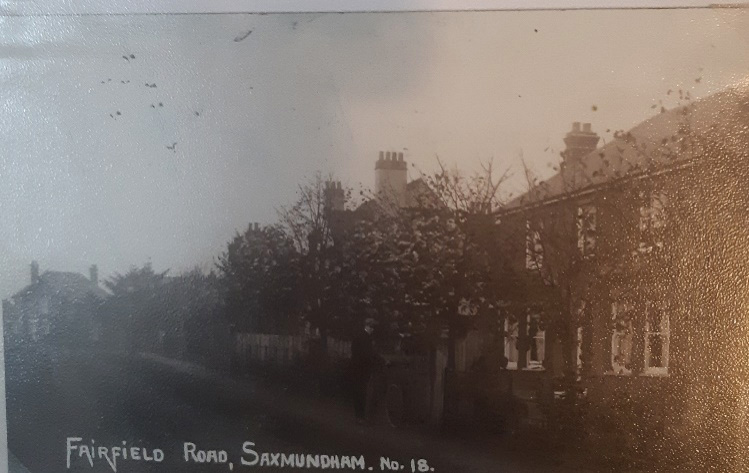 Reginald lost his life in the attack on Ovillers but thankfully his brothers Charles and Harrison survived hostilities.  This narrative links both the First and Second World War through Reginald Robert Tillett and his brother Harrison Augustus.

Reginald Robert Tillett and his five siblings lost their father, Robert Augustus Tillet in January 1901 and their mother, Harriett (nee Bayles) supported her children, by working at home in Fairfield Road as a seamstress.  By 1911, Reginald’s brother Harrison and sister Florence had left home leaving Charles Edgar a grocer’s assistant and Reginald a gardener to help with household finances whilst their sister, Grace attended school

With the outbreak of the First World War the two remaining brothers left home.  Reginald enlisted in the 7th Battalion, Suffolk Regiment and first served overseas on 30 May 1915.  He survived just over one year and died in action on 3 July 1916.  Likely he was killed in the attack on Ovillers in which the battalion’s casualties totalled 470.  Reginald has no known grave and is commemorated on the Thiepval Memorial.  He is also remembered on Saxmundham’s Chapel, Church, Fromus Square and the Oddfellows memorials.    Reginald’s other brothers also enlisted but thankfully survived.

Charles Edgar Tillett enlisted in the Royal Army Medical Corps, survived overseas service and was discharged a few months before the end of the war in August 1918 due to sickness.  Harrison Augustus Tillett, the eldest brother, rose to Acting Sergeant and served overseas until demobilisation after the end of the war.

In 1911 Harrison, born in May 1889, lived in Marylebone Street, London and worked as a tailor after originally joining the navy for a short period from July 1906 – Oct 1907.   He married Emily Lydia in March 1914 and the couple were blessed with two daughters before, aged thirty-five he was posted overseas to the Western Front in November 1916 with the 2nd Battalion, London Rifle Brigade.  Before the end of the war, on 19 June 1918, Harrison and Emily had another child, a brother for their daughters.  The child was named in remembrance of Harrison’s deceased brother; Robert Reginald Tillett.  Sadly, he too would die in war. 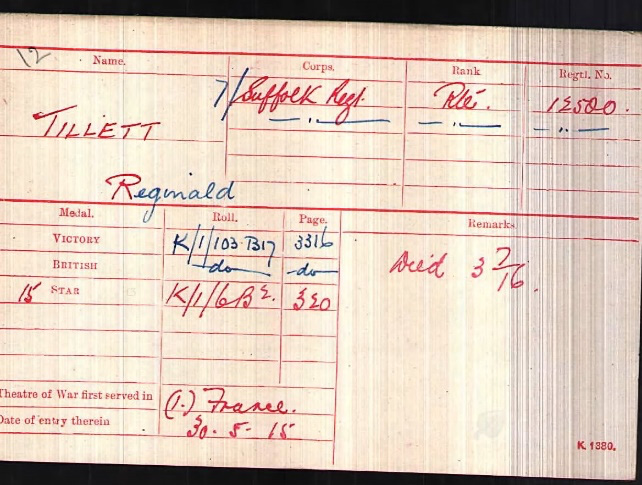