Aged twenty, Charles, a former gardener, enlisted in the 2nd Battalion of the Suffolk Regiment in Ipswich.  It is likely he married his sweetheart, Ethel G Woods prior to his posting to the Western Front.  Sadly, their marriage lasted less than one year. Charles George Cooper perished during fighting in the Zonnebeke region in Belgium on 26 September 1917.  His widow Ethel lived at 4 Quebec Cottages, Curlew Green, Kelsale and thus Charles George is also commemorated on the Kelsale Church memorial.

Charles the eldest son of Benjamin and Elizabeth Cooper’s six children was born in Saxmundham.  His father was employed as a groom/gardener in 1901 and by 1911 Benjamin worked for Flick’s auctioneers as a porter.    Also, by 1911 the family moved from Flick’s Cottages in North Entrance to Bank Cottage.   Aged twenty years old, Charles, a former gardener, enlisted in the 2nd Battalion of the Suffolk Regiment in Ipswich.  It is likely he married his sweetheart, Ethel G Woods prior to his posting to the Western Front.  Sadly, their marriage lasted less than one year. 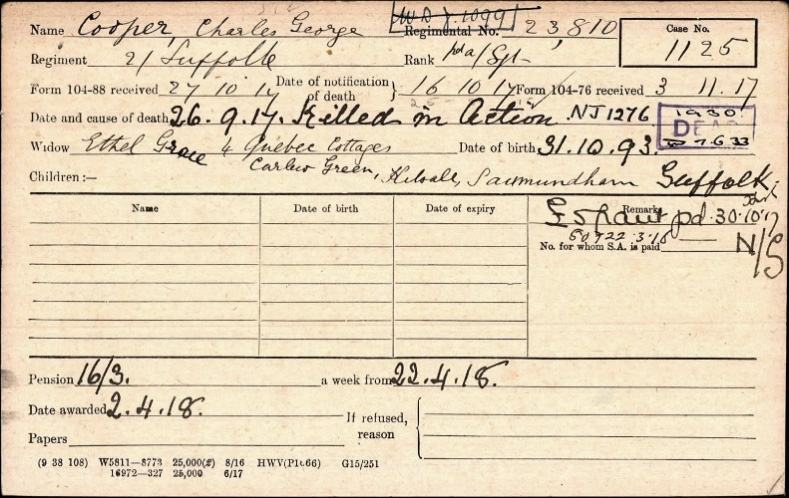 Charles George Cooper perished during fighting in the Zonnebeke region in Belgium on 26 September 1917 and is commemorated on the Tyne Cot Memorial.    He is also remembered on Saxmundham Church, Chapel, Fromus Square and Oddfellows memorials.  Additionally, as his widow Ethel lived at 4 Quebec Cottages, Curlew Green, Kelsale, Charles George is commemorated on the Kelsale Church memorial.

Ethel remained a widow for thirteen years before marrying Leonard R J Sharman, a farm worker and continued to live in Kelsale until her death in October 1975. 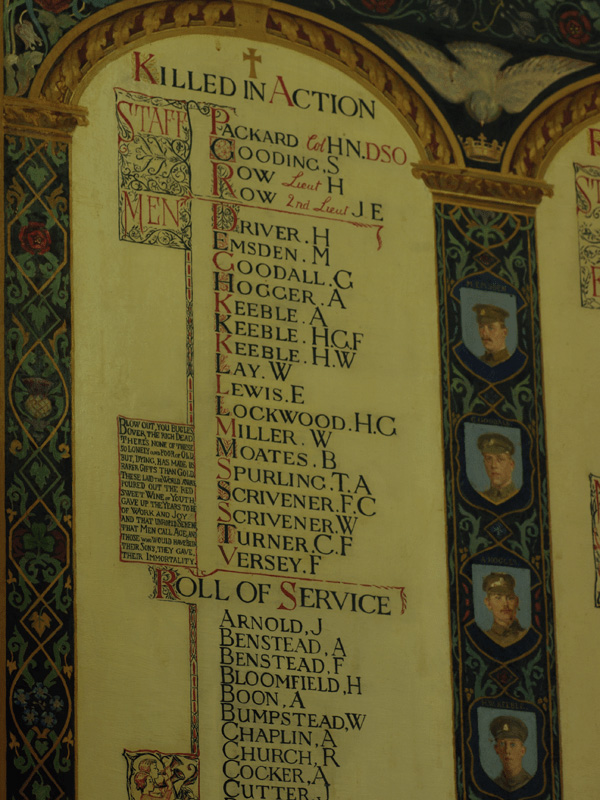 William Benjamin and Emily Row lost both of their sons Harry Akers and John Eric in the First World War.  Likely both were destined to work in the family seed, corn and coal merchant business located off Chantry Road.  The bereaved parents erected a plaque in St John the Baptist Church and the brothers in addition to commemoration on the Saxmundham memorials are remembered on the Packard Memorial now located in Bramford Church.

The 1911 census recorded that William Benjamin and Emily Row (nee Woodward) were blessed with eight children, seven of whom were still alive, five daughters and two sons.   Less than six years later both of their sons had lost their lives during World War One.      William Benjamin, proprietor of a seed, corn and coal merchant business lived in North Entrance at North Lodge, which later became Fairfield Preparatory School and then the Georgian Guest House.  His business premises were located off Chantry Road. 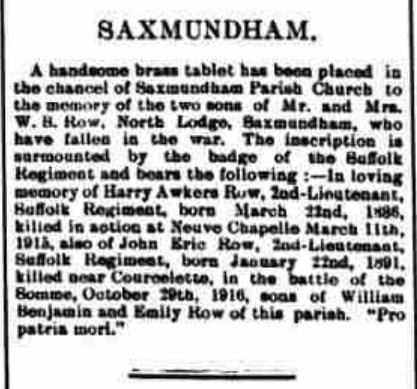 In 1911, eldest son, Harry Akers Row, assisted his father in the business whilst John Eric worked for Edward Packard and Co of Ipswich and Bramford, fertiliser manufacturers.  The company was later sold to Fisons Limited.  Seemingly at some time both Harry Akers and John Eric worked for Packards as both men are commemorated on the Packard Memorial that now hangs in Bramford Church. Previously the memorial hung in the office at Fisons Limited in Papermill Lane, Bramford until it closed in 2005.

Edward Packard senior, a pharmacist in Saxmundham in the mid-nineteenth century, started his fertiliser business in the town before completely moving his enterprise to the docks area in Ipswich.  Possibly Benjamin Row stocked Packard fertiliser for his customers and his sons were offered positions with Packards to gain insights of working in a larger organisation.   They may also have made useful contacts whilst boarding at Ipswich Grammar School and likely Harry Akers Row, a Territorial solider, knew fellow Territorial, Colonel H N Packard.

Harry was gazetted to Second Lieutenant in the 4th Battalion of the Suffolk Regiment where he was in command of the half company of Territorials in Saxmundham.  On the outbreak of war he volunteered for service in August 1914.  On the 8 November Harry was posted to France and was killed in action at Neuve Chapple.   His commanding officer wrote to the family, saying that Harry:

‘died well, at the head of his men, leading them most gallantly in the face of a murderous fire.  I saw him shortly after he was killed lying in a trench shot through the head…. It will be a relief to you to know that he died without pain.’ 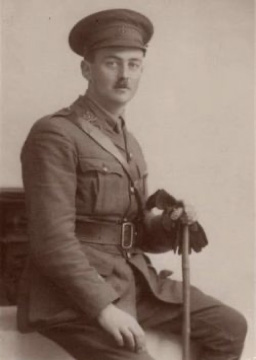 John enlisted in the 8th Battalion, Suffolk Regiment as a Second Lieutenant and served in France during 1916 and whilst fighting in the Courcellete region during the Battle of the Somme, was killed in the trench by a shell.

John has no known grave and is commemorated on the Thiepval Memorial.

Both brothers are remembered on the Saxmundham Chapel, Church and Fromus Square Memorials and on a plaque erected by their parents in St John the Baptist Church. Both Harry and John are also commemorated on the Packard Memorial in Bramford Church. 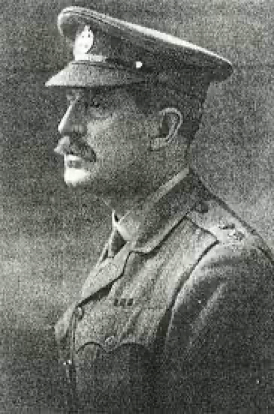 Charles Pretor-Pinney a retired career soldier who served in India aged fifty in 1915, re-enlisted in the army with the rank of Lieutenant-Colonel.   He was awarded the Distinguished Service Order for his actions in Contalmaison on the Western Front in North-West France in July 1916; the last to leave, he ensured all his men returned to the line before wounded he made his way back.  In civilian life he was a member of the East Suffolk County Council, magistrate, and a support of the Territorial Force.

Charles Pretor-Pinney, the son of Frederick W and Lucy Pinney was born at Upper Grosvenor Street, London and lived in Somerset in the family home.   A career soldier, Pinney enlisted in the Somerset Militia in 1882 concurrently with studying at Trinity College, Cambridge.   In 1884 he transferred from the Militia to the Army as a lieutenant in the Royal Fusiliers then transferred to the Rifle Brigade in the same year.  By 1893 Pinney gained promotion to captain and was an Aide-de-Camp (ADC) to the Governor of Bombay.  During this time he married Phyllis Julia Stuckey in June 1894.  Pinney retired from military service in 1898 but re-enlisted during the Boer Wars.

In March 1899 Pinney re-joined the army and was attached to the Rifle Brigade where he gained the rank of major whilst serving in South Africa during 1901-1902.  During the subsequent years he lived at the Grange, Somerton before moving to Fairfield House in Saxmundham in 1904.  Aged fifty in 1915 he re-enlisted in the army with the rank of Lieutenant-Colonel.   The following is précised from Michael Wood’s research on Pinney’s First World War service and the award of the Distinguished Service Order:

Pinney in charge of the newly formed 13th Battalion of the Rifle Brigade fought in a battle to take Contalmaison in July 1916 on the Western Front in North-West France.  At 8.00 p.m. Lt-Col Pretor-Pinney received orders to go ‘over the top’ at 8.45 p.m. with supporting units on each side.  They crossed an open area to reach the German trenches and the enemy’s machine guns decimated the troops.  Without artillery support the battalion fought on and achieved their objected, a chalk quarry fortified by the enemy.  Pretor-Pinney now sheltering in a shell-hole wondering what had happened to all the support he had expected, received a message saying that the entire attack had been cancelled.  The message had reached the other units before 8.00 p.m. and thus there was no support for the 13th Rifles and tragically the Brigade H.Q. was unaware that the battalion had undertaken the attack.  Unable to send a runner due to the deadly machine gun fire the soldiers fought on until they eventually received an order to withdraw.

The soldiers crept back to the British lines and the artillery that had no idea of the location of the men opened up a heavy barrage which killed or wounded even more men than the Germans had killed earlier.  The fighting continued for days and some wounded lay in shell-holes for up to a week.  Nearly all the officers were killed or wounded; over three hundred other ranks were killed, wounded or recorded as missing.  Gradually the wounded were taken back down the line and Lt-Col. Pretor-Pinney was the last to leave.  Several weeks later a friend visited Pinney in hospital and found him in tears over the dreadful toll of his battalion.  Michael Wood considers that Lt. Col. Pretor-Pinney’s DSO was awarded during this action for his leadership of men.

Charles Frederick and Phyllis Julia Pretor-Pinney had no children.  Phyllis left Saxmundham and by 1921 lived in Chelsea.  Her personal inscription on her husband’s war grave reads:  ‘Lord Lift thou up the light of thy countenance upon him, Psalm IV’.  Phyllis lost her husband and East Suffolk lost a councillor, magistrate and a keen supporter of the Territorial Force.    Lt-Col. Pretor-Pinney is commemorated on the Saxmundham’s Chapel, Church, and Fromus Square memorials. 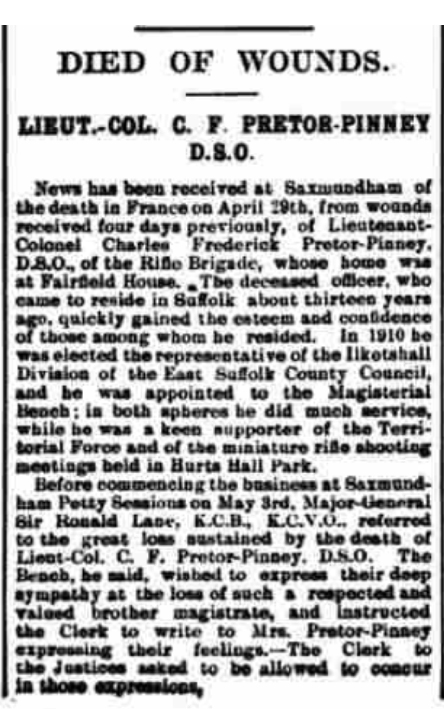