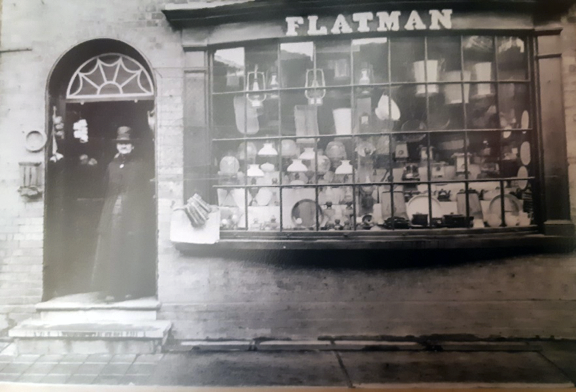 Variously considered to be Private Frank William Flatman or Frederick John Flatman, research points to the F W Flatman recorded on Saxmundham Memorial as being Frank William.  Frank was the son of Frederick and Ellen Flatman, ironmongers.   He enlisted in Saxmundham firstly in the Suffolk Regiment then transferred to the 1st Battalion Bedfordshire Regiment.  Frank likely perished at Achiet Le Petit, one of over 120 other ranks who perished on 23 August 1918 during the second battle of the Somme.

Frank William born 1888 was the youngest of three children born to Frederick and Ellen Flatman.  His eldest brother, Robert, died during 1914 and his father perished in March 1917.  Thus, Frank’s mother, Ellen ran the ironmongery business located on the High Street on her own whilst both of her surviving sons fought for their country.  Brother, Frederick Crouch Flatman enlisted in August 1914, a few months after Robert died.  Thankfully, he survived, albeit was discharged from the Suffolk Regiment wounded in May 1917.  Over four years from 1914, Ellen lost her husband and two sons as sadly, Frank William perished in August 1918.

Before commencement of the war Frank left Suffolk to work in Bexhill on Sea as a grocery assistant.  Seemingly he returned after 1911 and married Caroline Evans, a dressmaker living with her widowed mother in Orford.  It appears that Frank enlisted in Saxmundham firstly in the Suffolk Regiment after 1916 then transferred to the 1st Battalion Bedfordshire Regiment.  Frank likely perished at Achiet Le Petit, one of over 120 other ranks who perished on 23 August 1918 during the second battle of the Somme. 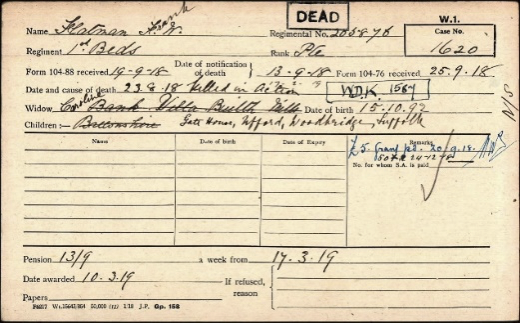