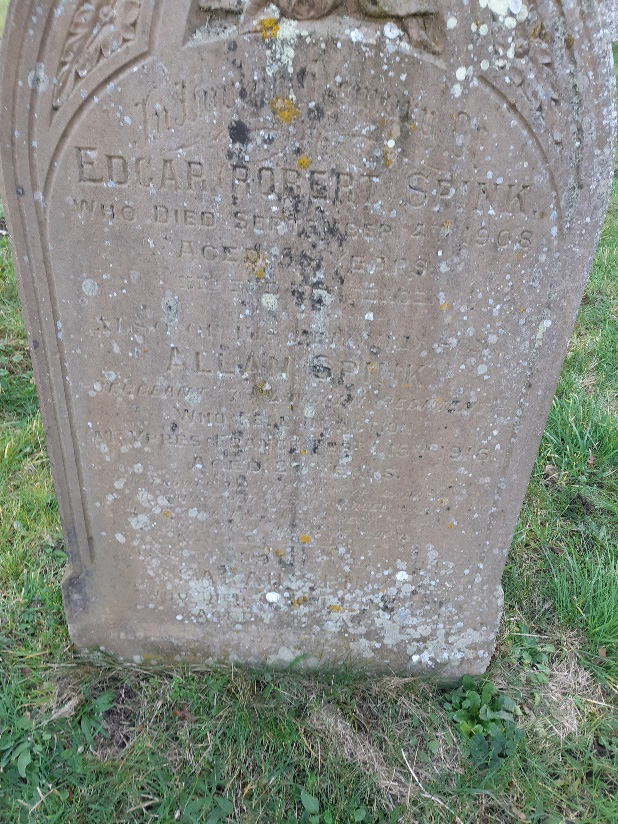 Allan Spink was reprimanded for neglect of duty while in trenches but maintained his rank as sergeant.  His character was noted as ‘very good’ and seemingly this misdemeanour was forgiven.  Perhaps Allan was outspoken about the horrors he witnessed, and the conditions his men endured when first posted to the Flanders.  It is in the trenches that Allan lost his life likely at The Bluff, Ypres.  Allan did not marry, and his mother received his war gratuity payment of just over £3.6s.

In 1911, Allan Spink or Spinks, the second youngest of eight children born to Edgar (also known as Robert) Spink, a house painter, and his wife Sarah (nee Hatcher) lived with his widowed mother and youngest sibling, Ella at 40 Church Hill.  It is likely that Allan, a Boiler Maker’s labourer later lodged with his sister Minnie and her husband Robert Lowe in Lincoln.  Robert, a Boiler Plater previously lived in Leiston, where he likely worked for Garrett Engineering, and it appears that Allan joined his sister and brother-in-law to find work in the city.

It is in Lincoln that Allan, aged twenty-six, and five foot, seven inches tall, enlisted as a private in the 7th Battalion Lincolnshire Regiment on 4 September 1914.   This Battalion was part of Kitchener’s Second New Army.  After training in Lincoln, Bovington, Lulworth and Lower Down, Winchester, and gaining promotion first as a Lance Corporal, Corporal, and as a Lance Sergeant Allan was posted overseas to France on 14 July 1915.  Despite that fact that he was ‘severely reprimanded’ for ‘neglect of duty when in the trenches’ in August 1915, Allan maintained his rank of Sergeant granted on 31 July 1915.  Seemingly as his character was noted as ‘very good’ this misdemeanour was forgiven.   Perhaps Allan was outspoken about the horrors he witnessed, and the conditions his men endured when first posted to the Flanders. The issue was likely intensified as none of the men expected to be posted overseas as the Battalion part of the 51st Brigade, 17th Northern Division, was initially selected for Home Defence duties.  However, Allan and his men were ensconced in trench warfare.

It is in the trenches that Allan lost his life likely at The Bluff, Ypres.  He has no known grave but is commemorated on the Menin Gate Memorial in Ypres.   Allan did not marry, and his mother received his war gratuity payment, pension and his personal belongings forwarded from the Western Front.  Poignantly amongst the handkerchief, set of false teeth, bible, leather purse were twelve photographs.  These were likely images of his family and his mother and Sarah ensured that his brothers and sisters all received a share of his legacy, namely the income he accrued from his war service.  Sisters Annie Furze, Janet Allnutt, Minnie Rowe, Ella Ship (who lost her husband William Frances Shipp), brothers, Thomas and William and sister-in-law, Hetty Spink (wife of Edward) all received just over £3.6s each.  Sarah also received the same sum.

Sarah had lost her husband in 1908 and her son, Allan eight years later and her daughter, Ella not only lost her brother, but her husband William F Shipp in October 1917 who, along with Allan Spink is commemorated on the Saxmundham Church, Chapel and Town War Memorials.  Similarly, Allan is also remembered on the wooden Oddfellows Memorial plaque that at one time hung in the Market Hall.      Allan is also commemorated on his father’s, Edgar’s headstone in Saxmundham Church graveyard.